I Just finished the National Geographic Docu-series based on the book “The Long Road Home” written by Martha Raddatz.

First thing I have to say is that it was wonderful. I thoroughly enjoyed every minute of it. So much so that I will have to go read the book now. It brought back the fact that even though these were American soldiers and that battle took place, that it could have been any country in the same situation.

I am a Canadian living in the US and I want to say to those men that fought in that battle, that I thank you for your bravery and your gallantry. You fought a battle that was harrowing and vicious and through it all you showed compassion when the need was given.

Martha, if I may call you that, thank you for writing this book. Till I had seen the series, I had not heard of the battle. I was moved to tears at times and cheering at other times. I saw men that were brave and vulnerable at the same time. The kept their heads for the most part and weren’t afraid to show the pain and the suffering that they went through. I applaud you and say again thank you.

To the 1st Cavalry Division, thank you also. Through it all, you took on the enemy, fought with courage and bravery. I have never been in the military. I was not “good enough” due to medical problems. I don’t know what you went through. I don’t think I could have done it. Thank you for your service.

Miss Raddatz, I don’t know how to get a hold of the service men that fought then. I am hoping that you will pass this on to them and offer them my thanks.

To the folks that are reading this, please Thank a Veteran. No matter what war they served and no matter what country. They all deserve our thanks and appreciation. I have two brothers that although they never saw battle, did serve in the military in Canada. My brother Robert “deseased” (Army) and Leyton (Airforce). So say thank you and shake their hand and if they will allow it, a hug.

“Keep Looking up. For His coming is nigh!”

Christmas, a time for presents, family, indulgence and parties. When we over eat, over drink and over everything. We tend to forget what this day means. Is it all about gifts and parties and over indulgence or is it about the baby born in a manger all those years ago.

To me it is family, feasting and the child born in a manger. For aside from the child, there would be no Christmas. Sure there would be the Winter Solstice that celebrates the new sun but to me and as important as that is, it doesn’t deserve a celebration.

I think Linus from the Peanuts gang said it best.

Isaiah  prophesied about Jesus and was very direct.

Micah predicted the birthplace of the Messiah.

I could go on and on but alas, I don’t have all day. So let me say this.

Jesus Christ, King of Kings, Lord of Lords, Fairest of Ten Thousand! Was born to die. He was born so that man (male and female) could be saved from the evils of this world. That is what this day is all about. The birth of a child who would be the final and greatest sacrifice that man has ever made. Even if you don’t worship him, acknowledge who He is. Because you see, even Santa knows the reason for the season. 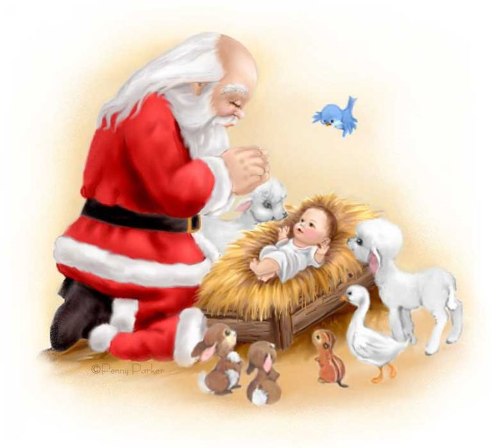 Merry Christmas to all and to all a good night. Have a wonderful holidays and enjoy your family and friends. Treasure them for they will not be around forever. Merry Christmas and Happy New Year!

“Keep Looking Up! For His coming is Nigh!”

What are some of yours. As we get older they pile up, like a pile of newspapers that we don’t want to toss out. We let them hang around hoping that one day we might actually do them and yet we never do. No matter how many times you try to ignore them, they always seem to mock you and make fun of you. There are those regrets that you never will deal with for they are too painful. They hurt every time you think about them or they don’t do anything at all cause you have closed them off but they are still there mocking you.

Some don’t have any regrets at all. They did what they did and have no qualms about them. These are the regrets that sit idly by and wait to pounce and worm their way into the brain and eat away slowly without you even realizing till it is usually too late.

I have a ton of regrets. They are stacked around just like the aforementioned newspapers. They haunt me like a ghost that is lost in the ether and can’t find it’s way out. Here is a list of mine. Some are self-afflicted and some are ones that I can’t change no matter what I try to to do.

I regret a lot of things. Some I keep to myself and others people know about. I have regrets that eat at me and others just sort of sit there more as a reminder of what I could have been. Regrets of things started but never finished.

My biggest regret is not going through the adoption process when my first wife Rose was diagnosed with leukemia. It bugs me to this day. I could have been the dad that I always wanted to be but I chose to end it. I just didn’t think that it was fair to bring a child into a situation where she had lost one mom just to loose another!

I have always wanted to be a dad and bring a child up with the same values I have. (Oh lord, that poor child). But I didn’t do that. I chose to think of Rose and the child instead of myself.

I regret not being there when my Mom died. I unfortunately could not afford to come back. I miss her and know that I will see her when I get to heaven.

I regret not being around when my other Mom died. Karen was the only one that got away with telling me off. I loved her so much and miss her just as much.

I regret not pursuing my dream of singing or acting. I just never got around to doing it. I guess God had other plans for me.

I regret not getting my novel published. Always thinking it is not good enough! I have written three of them and I just don’t think they are good enough. They sit on a data card and wait while I get up the guts to send them to whomever will read them.

One of the few things I don’t regret is marrying Rose or Jeanne. They have and are my soulmates. Most only get one. I got lucky, I got two. Some said that my marriage to Rose would never last. We had 14 wonderful years. They all said that moving to Oregon was a big mistake. 19 years later, we are still together.

The one thing I do not regret at all is falling in love with my First Love! For those who don’t know who that is, that would be Jesus Christ! He is my First Love because He first loved me.

Let me make one thing clear, regrets are not failures. Regrets are just that regrets.

We all have regrets but it depends on what you do with them. Some you can’t stop because it is too late and normally because the reason is no longer in or part of your life anymore. Some you can deal with if you can reach or deal with the problem at hand. Some you have to lay at the Lord’s feet and let Him deal with them.

“Keep Looking Up! For His Coming Is Nigh!”